Baron Palace in Cairo has been open to the public for the first time since June 30!
Oriental architecture reminiscent of India or Angkor Wat even though it is Egypt! ?
The Heliopolis area, where the Baron Palace is located, was itself developed by the Belgian businessman Edward Enpain, and was built as his own residence.
At that time, it seemed to be the design because oriental architecture was popular in Europe under the influence of the Paris Expo.
Admission Fee 100 adult Egyptian pounds, £50 extra on rooftop open from 9am to 6pm.
It is close to Cairo Airport and recommended for sightseeing during transit times! Egypt is conservative for food, but the number of restaurants offering sushi has increased dramatically in the last year or two.
However, while many sushi is far from Japanese sushi, MORI SUSHI offers stable and delicious sushi. Of course, it is inferior to Japanese sushi, but I am still very satisfied with the desire for Japanese food. The fried sushi is also hot and surprisingly delicious, but be careful as it is too voluminous. The large malls almost always contain MORI SUSHI, which is popular with Egyptians. When it comes to Egypt, ancient ruins such as pyramids are popular with Japanese people, but in fact, the Red Sea beach resort, which boasts the highest transparency in the world, is also famous, and people who stay mainly from Europe and Russia on long vacations throughout the year. Will visit a lot.
The beach resort is also popular with Egyptians, and the other day our Japanese staff went on vacation with their families.
From the pier on the hotel's private beach, you can see many colorful fish with the naked eye. The food was delicious and it seemed to be very relaxing and very satisfying. 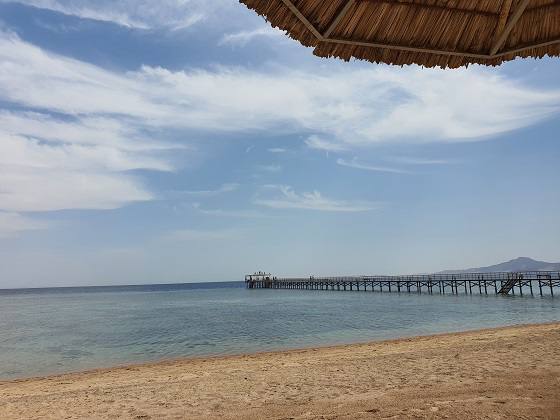 A new restaurant overlooking the 9 pyramids has opened!

A restaurant has opened at that superb view point!
Its name is "9 Pyramids Lounge".
There are two types, a table seat and a Bedouin style tatami room. It's completely outdoors, so it can be a bit harsh during midsummer days, but you can enjoy your meal while gazing at the nine pyramids!

Although it is located in the desert, it also has a clean toilet.
Alcohol will also be available after January 2021. 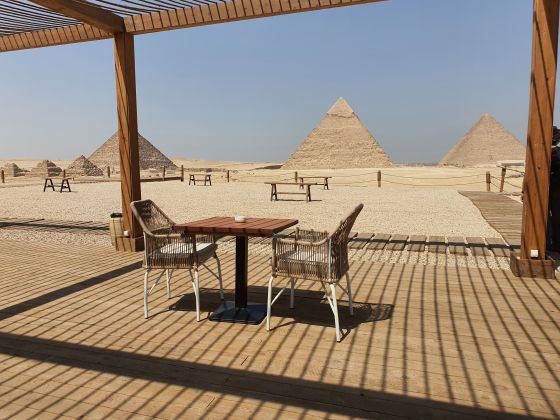