Recently, tourists from Japan are returning to NY more and more.

Meanwhile, it's finally Saturday, May 14th.
NY's first Japan parade will be held!

From traditional portable shrines, drums, martial arts, oiran, and dance, the Japanese community in NY will do everything in their power.

Sailor Moon, which is popular from Japan, also comes to Japan and marches!

Sing gospel in English and Japanese with American singers who appeared in Carnegie together before the pandemic!


It has been 150 years since the Consul General of Japan was established in NY and baseball was introduced to Japan!
Various other things

With gratitude for the exchange between NY and Japan, Central Park West in Manhattan, NY will be flooded with "JAPAN" on Saturday.


<JAPANパレード>
In the 19th century, the "Iwakura Mission", which traveled around the world and had a great influence on the transformation of Japanese society, celebrated its 150th anniversary in the United States, and 8th Avenue in New York, the center of the world, is filled with Japanese culture. NYC's first official Japanese parade

* A story fair with Japanese food stalls will be held at 69th Street!


I'm really happy about the resurrection of NY

When I come to NY, I will go to Kimiko's Harlem tour ↓


🌸 Click here for an "online tour" where you can experience the feeling of going to NY Harlem from home ↓
https://www.veltra.com/jp/north_america/new_york/p/10511 <From this weekend, NY is officially "summer" 🏄‍♂️🏖>

Last weekend in May!

From this "Memorial Weekend", "Summer in NY" officially starts every year.


Because it will open to the sea in various places

This week I saw a lot of lifeguards and life savers gathering at the beach for face-to-face meetings and warm-ups.

If something happens in the sea, they will fly immediately and help you, so you can rest assured.

The first to be released from the corona
Enjoy the summer for the first time in 3 years! So

The airport and train station are full of people who enjoy their vacation.

The city of NY is also ready to accept, and there are plenty of events.


I also this weekend
We would like to introduce many Japanese people living in the United States and those coming from Japan to the Harlem Walking Tour and Gospel Tour!


In NY, I am happy that my new daily life is completely "everyday".

---
If you come to NY, please come to Kimiko's Harlem Tour ↓


🌸 Click here for an "online tour" where you can experience the feeling of going to NY Harlem from home ↓
https://www.veltra.com/… “Japanese who are active in the United States
~ Connect with Community ”

You can now listen to the broadcasts interviewed at podcasts from all over the world!
Of course there is also a story about the Harlem tour!

Tap ▶ ️ on the screen from the link below,
My comb appearance corner is from 19 minutes


"After last week's broadcast, from the listeners
I enjoyed the interview with Kimiko!
I want to try gospel!
Thank you again for being very popular. "

I received a broadcast link with a very happy message, so please listen if you like.

(Thanks to program caster Erika Sawa)

As expected with professional navigation

Old stories that I haven't talked about anymore

Even though it was a 7-minute corner, it was fun and I talked for an hour.


The story after recording was interesting, so he told me that I would like to include as much as possible. In this broadcast, it was a wonderful surprise that it was edited in 10 minutes!

thank you very much.
(The talk about the remaining 40 minutes that was cut will be somewhere on another occasion)

I would be very happy if you could hear it.


🌸 Click here for an "online tour" where you can experience the feeling of going to NY Harlem from home ↓
https://www.veltra.com/… 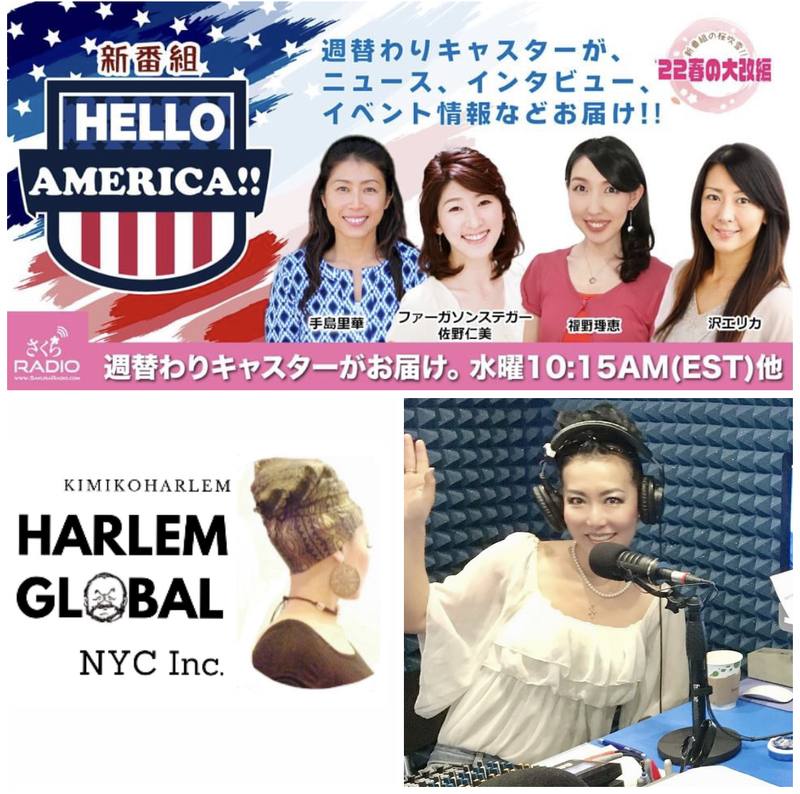 <Some Broadway performances have finished "Vaccine Certificate Presentation" from today!>

From today, May 1st (Sun)
Some Broadway musicals
"Vaccine certificate check" at the time of admission has been completed.

In this "Broadway musical movement" which is a symbol of NY,
There is a place to see the future of entertainment, so

This is very good news in New York.


Obligation to wear a mask during the performance
All performances will continue until the end of May.
(Wearing a mask after June will be decided in the future while observing the infection situation)


On Sunday, June 12th,
The Tony Awards, which determine the pinnacle of Broadway musicals, will be unveiled at Manhattan's Central Radio City Music Hall.

Before this big event,
The city of New York, entertainment is likely to get even more exciting!

――――――
When you come to New York
Please join me on Kimiko's harem tour.
Click here to apply ↓


🌸 Click here for an "online tour" where you can experience the feeling of going to NY Harlem from home without going to NY ↓
https://www.veltra.com/…