Today I took a tour of …

Today I took a tour of the Allegiant Stadium in Las Vegas.

Although completed last year, the city of Las Vegas has restrictions on admission to indoor facilities due to Corona, so it is this stadium that has never been able to hold an event with spectators.
Professional American football team RAIDERS has moved to Las Vegas, and since last year more than 60,000 fans have been scheduled to watch the game at one time at the stadium.

In the United States, vaccination has recently progressed, and people are going out at once.
Even in Las Vegas, the restrictions on behavior that had been used up until now have been gradually relaxed, and this time we are finally allowed to visit the stadium.
Fans who still have annual seats are now given priority to tour, but soon anyone interested will be able to take a tour.
The tour costs about $ 60 per person and takes about 2 hours with a guide. There are not only spectator seats, but also team owner suites and broadcast seats, VIP lounges, player locker rooms, and cheerleader locker rooms.
At the end, I got down to the field and took a picture.

It's natural, but everything is beautiful.
If vaccination progresses smoothly and the number of newly infected people decreases sharply, we will be able to watch the game with 100% admission in the American football season starting this summer. 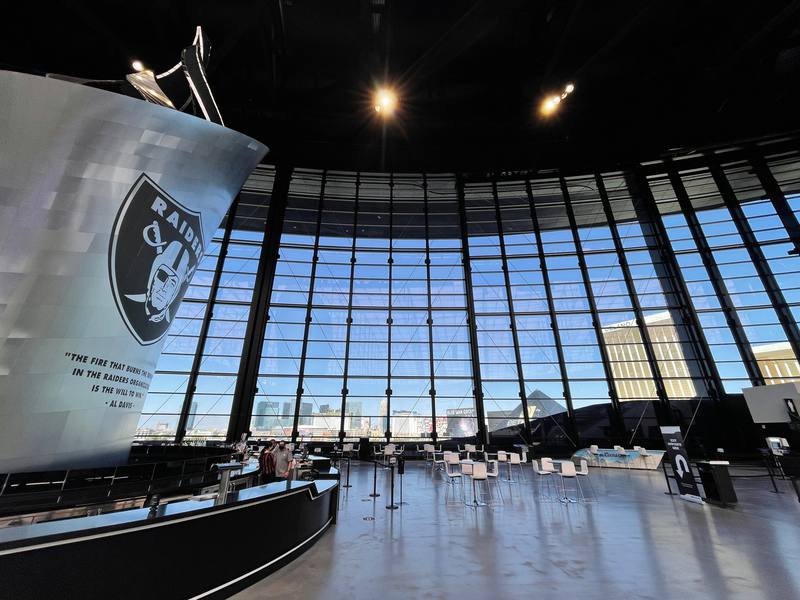 After enjoying a one-night camp at Zion on April 13, we hiked to OBSERVATION POINT.

OBSERVATION POINT is a scenic point about 600 meters up a 6.5km one-way trail to the WEEPING ROCK stop, which is usually a shuttle bus that runs inside the Zion Valley.

If you stand in this place even once, you will definitely be fascinated by Zion!

As I wrote in the article before, in Corona Sorrow, the shuttle bus in Zion National Park is restricted, so you can not get on unless you make a reservation in advance.
Moreover, because the purpose of many tourists visiting Zion is hiking, most cars once parked do not move all day long, and most of the limited parking lots disappear early in the morning.

Like the Grand Canyon and other national parks around, Zion National Park is visited by a large number of people every day, and the entrance to the park is congested with long lines of cars every day.
That's because many tourists think that Zion can only enter from the entrance of the park and see from inside the valley.
However, in fact, you can drive to the top of the mountain of Zion and hike the trails from both the east and west sides of the canyon to reach the scenic points and the interior of the canyon.

This time we camp at the east exit of Zion National Park, drive off-road to the east side of Zion to EAST MESA TRAILHEAD, then hike to OBSERVATION POINT.
It takes about 20 minutes by car from the east exit of Zion National Park to TRAIL HEAD.
It took about an hour and a half to walk slowly from the parking lot to the OBSERVATION POINT. The distance is about 5.5 kilometers one way with almost no height difference.
You don't need to book a shuttle bus, avoid traffic jams at the park entrance, and get to this spectacular view without hiking on steep climbs.
Also, there is no entrance fee to the national park!

Please come and see this magnificent view.
I will post a photo from OBSERVATION POINT. We had a one night camp at Zion on April 12th.

Camping is a trend in the United States as well as in Japan.
However, in the United States, there are countless places where you can camp, not just campsites, and with the exception of some popular campsites, there is almost no congestion, and you can enjoy nature in an environment where there are no people around.
Especially in the area of the Grand Circle, where we provide tourist information on a daily basis, there are countless camping spots, making it a paradise for camping enthusiasts.

This time, I stayed overnight with the company staff at a campsite just outside the east exit of Zion National Park, and on the second day I hiked to the observation point.
The area around the campsite is close to 2000 meters above sea level, and although it is cheerful with short sleeves during the day, the temperature drops suddenly at sunset, and at night it drops to about 3 ° C, so I was warmed up by a bonfire until just before going to bed.
The large campsite was quiet with only a few tents visible.

The distance from Las Vegas to Zion National Park is less than 3 hours by car, so even if you leave in the afternoon, you can fully enjoy camping there.
We arrived in the evening and set up a tent leisurely while drinking beer to prepare for the bonfire and dinner.
The main meal is ribeye steak grilled on a bonfire!
It was one of the best 5 steaks I've ever had.

When the area gets dark, the sky is full of stars overhead. It was a new moon and it was sunny, so I was impressed.
I will post a photo of the camp.
* Ribeye steak baked on a bonfire * Meal around the bonfire * Starry sky (I couldn't take a good picture ...) 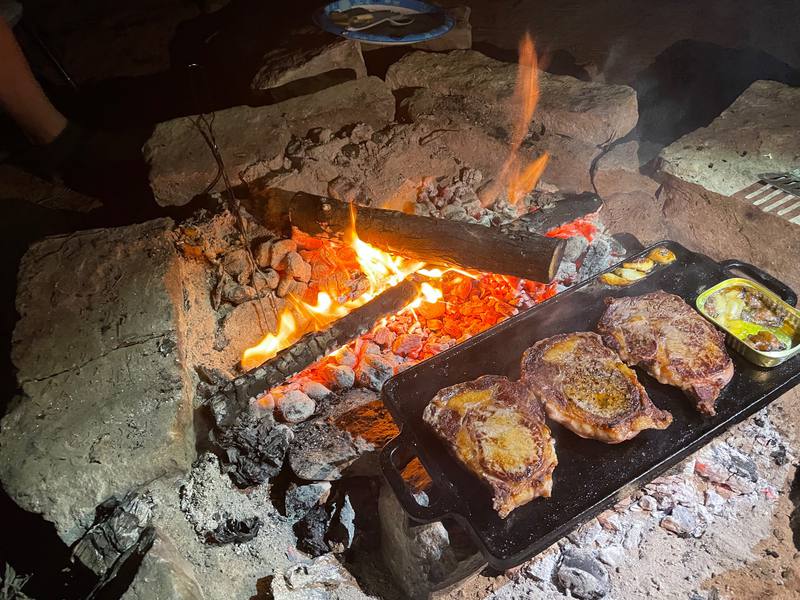 On Saturday, April 10th, the second day of the tour will begin at Page near Lake Powell.
Since Antelope Canyon is still closed, sightseeing in the Grand Canyon will be the main focus on this day.

Enter from the east exit of the newly opened Grand Canyon National Park and go sightseeing from the Desert View Point.
I'm really grateful for the reopening of the east exit because I've been bypassing the same move for the past year via Flagstaff.

I will post a photo of yesterday's dessert view from my guide. 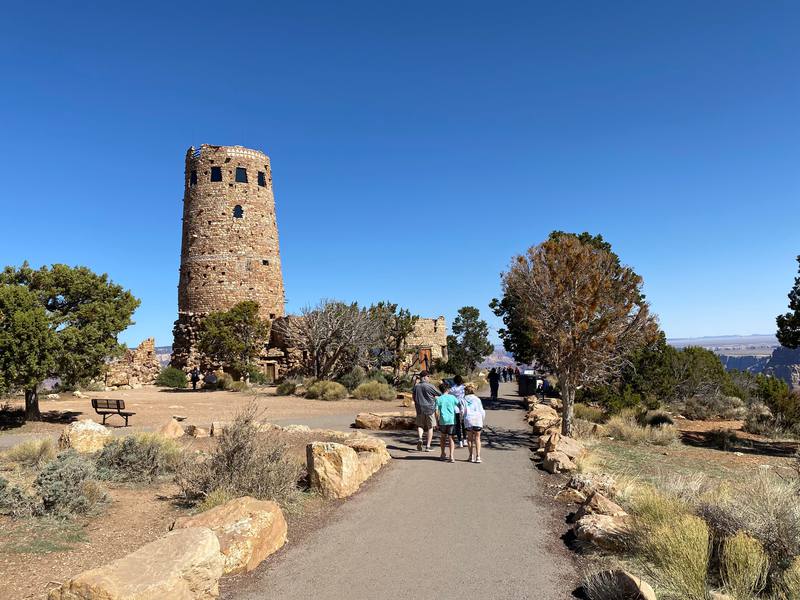