This is a sequel to the…

This is a sequel to the article about camping in the Norslim of the Grand Canyon.

On the first day, we visited North Slim and prepared BBQ for dinner early.
The campsite this time was 2700 meters above sea level, 4 miles before the entrance to the national park, and it was cool during the day, making it a paradise for us from Las Vegas. There is a buffalo in the grassland nearby (I could not see it this time) and the deep green is beautiful, and even in the same Grand Canyon, it is a different world.
The main dinner is a 500g ribeye steak that is grilled over an open fire!

On the second day, I moved from the morning and aimed at the unexplored TOROW EAP on the downstream side of Noslim.
In addition to having to run 200 km and 5 hours off-road on a round trip, 2 km before arrival runs on a rocky step like a staircase on a fairly rough road.
However, it is worth going to TOROWEAP even if you have a hard time, and the view of the Grand Canyon and the Colorado River from here is the best!

I will also post a few photos.
* Scenery from the unexplored TOROWEAP * No slim campsite * Ribeye steak baked on direct fire On June 19th and 20th, we held a one-night, two-day Grand Circle tour.

The guests were a total of 6 people, 4 family members from Houston and 2 couples from Chicago.

I was a little worried because it was a mixed ride tour in the corona wreck after a long time, but since the customer also lives in the United States, maybe because I got used to the life that returned to the normal in the United States now There was no sense of being wary (conscious) of others, and the customers became friends with each other, and the tour ended with a friendly atmosphere.

However, in the town of Tusayan where I stayed at the Grand Canyon, moths were abnormally occurring, and there was an unexpected happening that some moths entered the room as well as outside the hotel.

In Las Vegas, once every few years, a strange phenomenon occurs, such as an outbreak of moths and a horde of grasshoppers rushing to the city, but this year it seems that it is happening in the Grand Canyon.

This time as well, I will post a photo showing the situation at the site from the guide in charge.
* Customers watching the sunset at the Grand Canyon * At Lipan Point in the Grand Canyon I went to Sedona on a sewing trip on Wednesday, June 16th.

This time, we received applications for a total of 4 people, including a couple living in Japan and 2 women.
Las Vegas had a record heat of 46 degrees Celsius on that day, but Sedona also reached 42 degrees Celsius, which was as severe as it was.
Sightseeing spots in the western United States, including Sedona, have been crowded and crowded since around March of this year, but as expected, all the places to go on this day were empty parking lots and playing in the water. I felt that there were few people except for the oak creek (river) that can be done.

I went to the Cathedral Rock, Bell Rock, Chapel of Holly Cross, Airport Mesa, and Uptown, but I tried my best to think of the face of the client who was pleased while fighting the distant consciousness!

After shooting, I went camping with Flagstaff and returned the next day without returning to the hot Las Vegas. Flagstaff has the same altitude as the Grand Canyon and is over 2000m, so it was cool and comfortable as it dropped to about 30 ℃ during the day and 15 ℃ at night.

I will post the state of this shooting.
* Red rock crossing with Cathedral Rock in the background * At the power spot of Airport Mesa * In the Chapel of Holly Cross 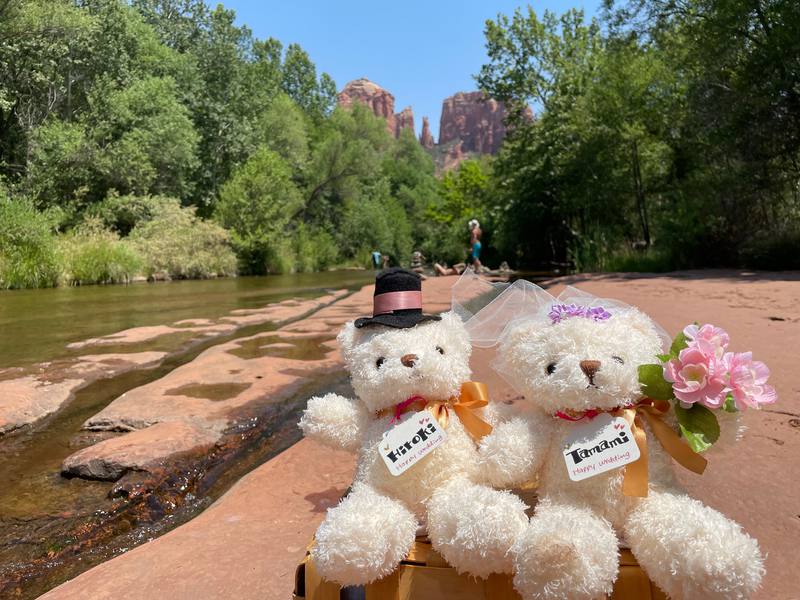 A one-day sightseeing tour of the Grand Canyon was held on Friday, June 11th.

The customer was a duo from San Jose.
Actually, trouble occurred immediately after leaving Las Vegas.
The sensor detected an abnormality in the tire pressure, and immediately stopped the van at a nearby parking lot to check it, and there was something like a nail stuck in the tire.
I immediately changed to a spare tire on the spot and continued the tour, but during that time I had to wait for about 40 minutes.
All the tours after that went smoothly as planned and the customers were satisfied, but I am very sorry to have kept you waiting even though it was force majeure.

Busy tours increase the risk of trouble, but I always feel that trouble just after leaving a hotel in Las Vegas is unfortunate.
I experienced various troubles when I was guiding the Grand Circle for many years, but accidents in barren areas where there is no town nearby sometimes get stuck on the spot for hours, so it is compared to Japan. You will be keenly aware of the size of America.